The Science of Hitting@tsoh_investingJuly 28
$34.9m follower assets
Microsoft: The $100 Billion Club
This is an extended preview of today's write-up, exclusively for Commonstock readers. To read the remainder of the post, please subscribe to the TSOH Investment Research service.
https://thescienceofhitting.com/p/microsoft-the-100-billion-club
At Microsoft’s Financial Analyst Briefing in April 2015, when CFO Amy Hood was asked about the company’s long-term financial targets in the Cloud businesses, this was her response: “When you think about the $20 billion run rate in Commercial Cloud Satya talked about [by YE FY18], the sky’s the limit as it relates to our ability to partner with customers and to truly help focus on their success and to help them reimagine their business.”
Microsoft went on to exceed that $20 billion target by a comfortable margin, with run rate Cloud revenues of $27.6 billion at year end FY18 (Cloud is primarily attributable to Azure, Office 365 Commercial, and Dynamics 365). And despite a snowballing revenue base, the Cloud business has continued to report strong growth rates over the ensuing four years: on Tuesday, the company reported that run rate Cloud revenues in Q4 FY22 reached $100 billion (+33% YoY in constant currencies). The growth of Cloud is the primary reason why Microsoft’s revenues have more than doubled over the past five years, from $96.5 billion in FY17 to $198.3 billion in FY22. 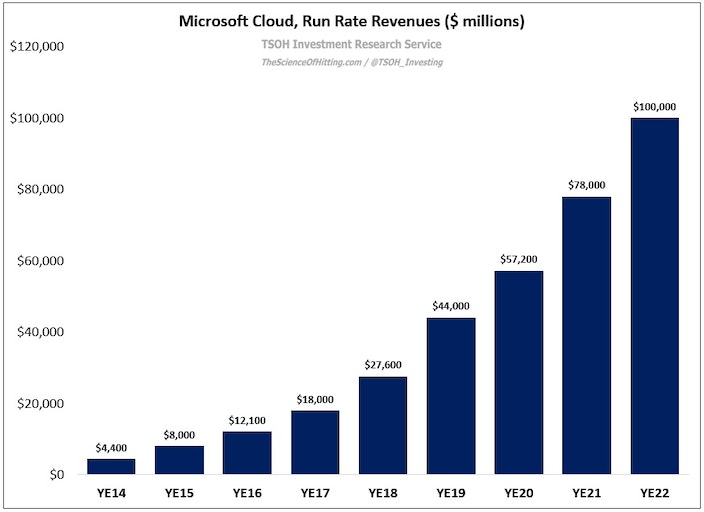 Ongoing strength within Microsoft Cloud, particularly in light of today’s heightened macroeconomic pressures, speaks to the importance of these services to customers; as management has regularly noted, digital transformation is imperative to the long-term success of enterprises around the world (CEO Satya Nadella: “When I talk with customers, it's clear there’s a real opportunity to help organizations in every industry use digital technology to overcome today's challenges and emerge stronger”).
Shifting to a segment view, we can see that Microsoft’s progress hasn’t been confined to a single area: each of the company’s three segments reported double digit topline growth in FY22 (for the second consecutive year), with the collective businesses reporting 19% EBIT growth, to $83.4 billion. 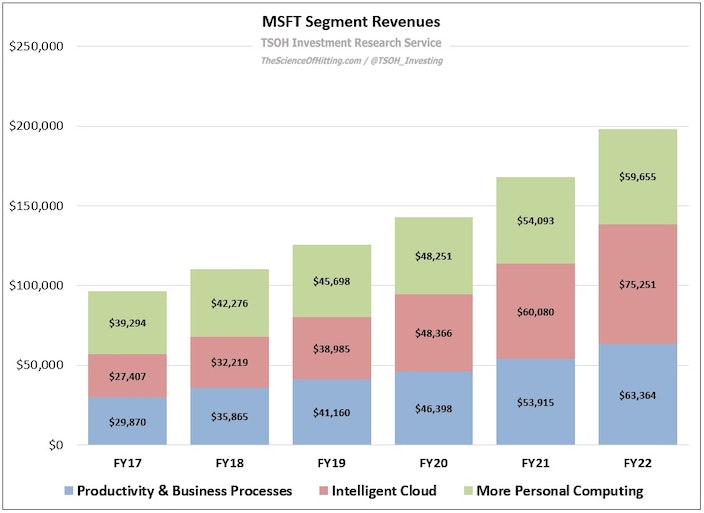 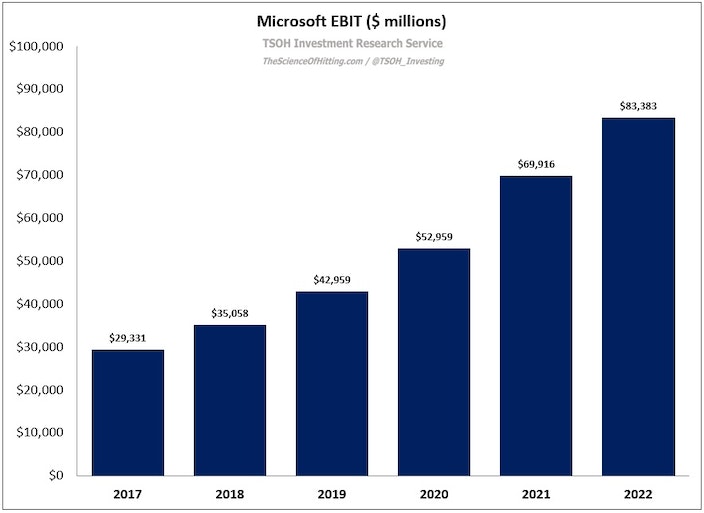 The standout performer was Intelligent Cloud (IC): despite a nearly 3x increase in its revenue base over the past five years, IC reported mid-20’s (%) revenue growth in FY22 for the third consecutive year (with a tailwind from the Nuance deal, which added ~100 basis points to the YoY growth rate). In addition, IC reported 43% EBIT margins in FY22, or ~1,000 basis points above FY17. As a result, segment EBIT has grown at a 29% CAGR over the past five years, reaching $32.7 billion in FY22. 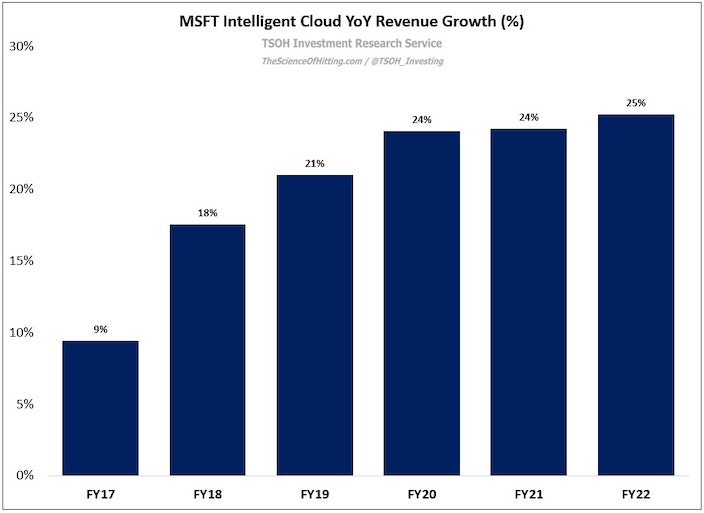 As shown below, constant currency Azure revenues (which is part of IC) were +46% YoY in Q4. On the conference call, Nadella spoke about Azure’s persistent strength in the face of broader macroeconomic pressures:
“What's happening with Azure is, in some sense, businesses trying to deal with the overall macroeconomic situation and trying to make sure they can do more with less… That's one of the big benefits of the public cloud. And that's why I think coming out of this macro crisis, the public cloud will be an even bigger winner, because it does act as that deflationary force… So, I think we'll do fine there.” 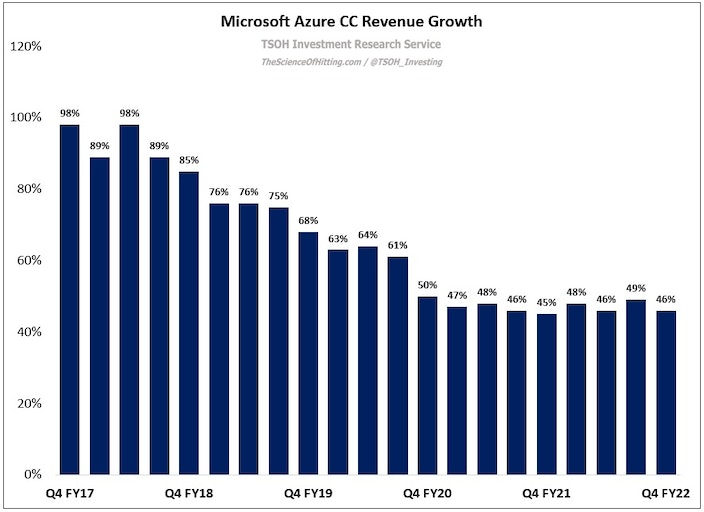 In the Productivity & Business Processes segment, FY22 revenues increased 18% to $63.4 billion, reflective of widespread strength across Office, LinkedIn, and Dynamics. In the Office business, Commercial and Consumer seats both increased mid-teens (%) YoY, with O365 Commercial reporting outsized revenue growth due to a sustained tailwind from higher ARPU’s (with E5 seats +60% YoY in Q4). As I wrote in August, Microsoft announced price increases across its Commercial SKU’s that began going into effect in early 2022 (on the prior point about E5, note that its list price is ~65% higher than E3). In Q4, O365 Commercial seats were +14% YoY, which is roughly in-line with the mid-teens growth reported, on average, over the past two years; said differently, it doesn’t appear the price increases are having any material impact on O365 customer adoption (based on prior disclosures, we can estimate that O365 Commercial has more than 350 million paid seats). The combination of continued volume growth and higher ARPU’s - through a combination of direct O365 price increases and E5 upsell - leaves the Office business very well positioned for FY23 and beyond. (“We've been building momentum with E5… We continue to add value to E5. And as that value has become more and more competitive, both at the category level and at the suite level, we are very focused on making sure customers get every bit of value in that SKU… In Q4 and specifically in the bookings numbers, E5 was a strong point in terms of both renewals and people adding E5 to their existing contract.”) 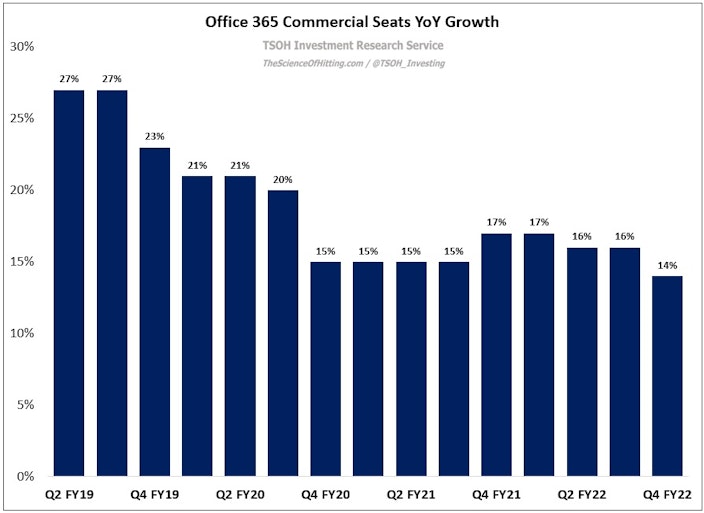 (End of Preview)
https://thescienceofhitting.com/p/microsoft-the-100-billion-club
Microsoft: The $100 Billion Club
At Microsoft’s Financial Analyst Briefing in April 2015, when CFO Amy Hood was asked about the company’s long-term financial targets in the Cloud businesses, this was her response: “When you think ab...
thescienceofhitting.com
No comments yetBe the first to add your insight!