The Science of Hitting@tsoh_investingMay 9
$15.8m follower assets
Spotify: The Power Question
“The product-market fit and power questions are different questions; one doesn’t necessarily answer the other… When you have a business model that gets you to product-market fit, there may be a power opportunity embedded in that and there may not be. Those are two very different problems. One is the problem of capitalizing on an inherent potential for power; the other is trying to figure out what you’re going to do to get power in something that currently doesn’t have it. That’s a very hard problem; it’s a second invent that’s every bit as hard as the product-market fit invent.”
- Hamilton Helmer
On April 27th, $SPOT reported its Q1 FY22 financial results. At a high level, I think the company’s recent performance has been largely as expected. For example, the world’s leading audio streaming service continues to report strong user growth, with 419 million monthly active users (MAU’s) as of Q1 FY22; the company has added 202 million net MAU’s over the past 36 months, roughly comparable to its total user base at the end of 2018 (207 million MAU’s). This reflects continued growth of ad-supported and premium subscribers, with both user bases up >3x over the past five years. On the user acquisition front, Spotify is winning. (TTM MAU growth in Rest of World in Q1 FY22 was ~25 million, the strongest print in the company’s history; it took some time, but the Stream On markets are now moving the needle.) 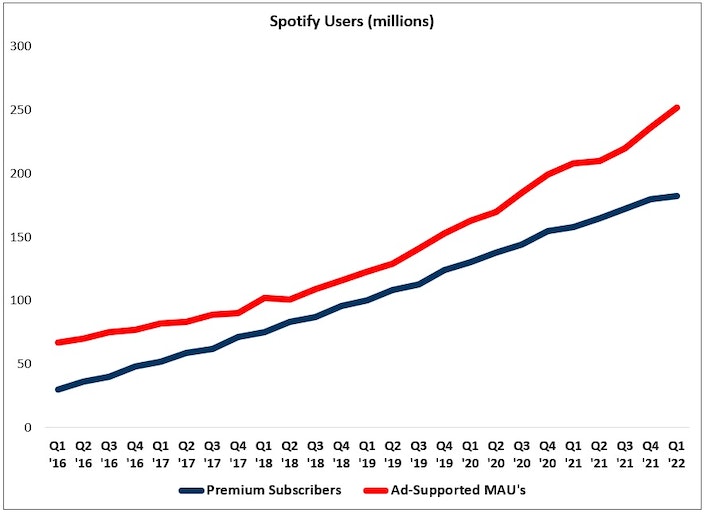 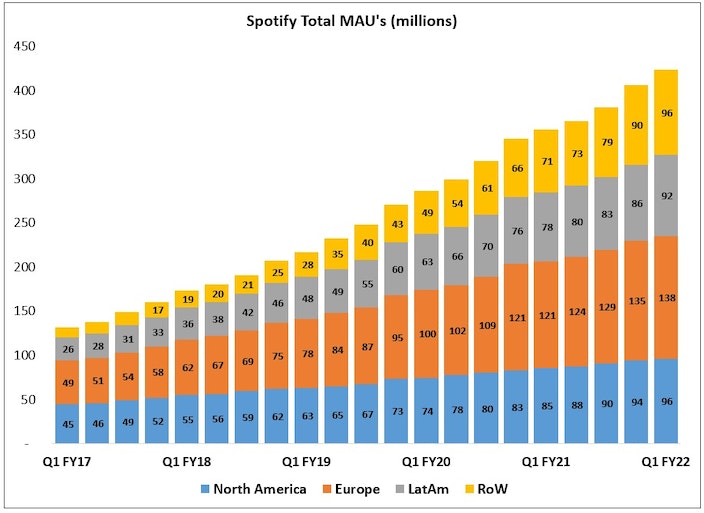 The problem is that the company is struggling to show continued progress in its business / financial model, which had led to a >70% decline for the stock from the February 2021 highs, Those issues can be succinctly captured by looking at a single financial metric: gross margins. (As a reminder, this topic has been a key focal point of mine from day one.)
A short history lesson can help us to frame today’s investor concerns.
In March 2018, when Spotify hosted its first Investor Day (prior to the direct listing), former CFO Barry McCarthy shared the following long-term targets. 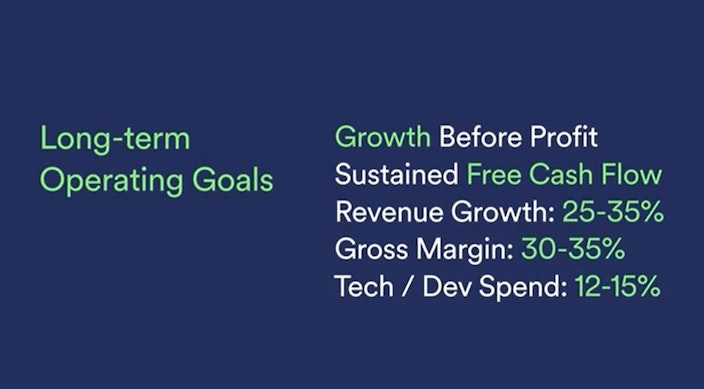 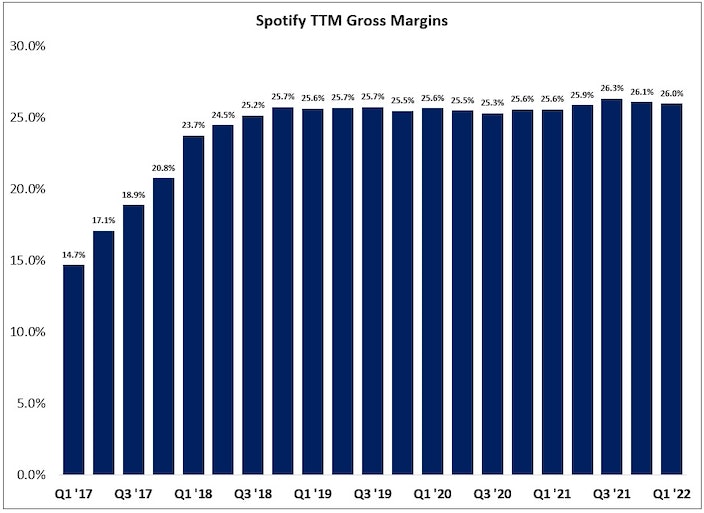 One notable point on this topic, as McCarthy discussed in early 2019, is that the >1,000 basis point gross margin lift from YE FY16 – YE FY18 was largely due to label negotiations that were completed prior to the direct listing:
“When I joined the business had a 15% gross margin, but this just wasn't sustainable at that level. So the last round of label negotiations was about elevating the margins to a point where at least the business was self-sustaining. And it was in the economic self-interest of the record labels to allow the margin to increase because streaming has been the single source of renewed revenue growth to labels. So, what was good for Spotify was good for the labels; that's why the margin increased. On a go-forward basis, is that going to happen again? No, it’s not going to happen again. It's not in their economic interest to allow it to happen again.”
In terms of the go-forward improvement in gross margins, McCarthy focused on three key items: (1) the two-sided marketplace in the music business; (2) mix shift to non-music audio content like podcasts; and (3) global scale.
“So, how is it that margin improves? The only way the margin improves is if we provide [labels and artists] with some value-added services that don't exist today that makes their business more profitable, and we benefit as well for doing it… One element on this is the two-sided marketplace, and it's based around understanding the likes and dislikes of your user base, and then creating tools and promotional vehicles for labels that allows them to grow listenership for their artists in ways that don't exist today… Secondly, you change the cost structure of the business. We did that at Netflix, very successful. It was a variable-cost model; we shifted it to fixed. When we shifted it to fixed in the form of upfront investments in streaming content that monetized well, it created enormous operating leverage. So, think podcasts, exclusivity, and extensions of podcasts-like content. Now it changes the working capital attributes of the business. You invest upfront, and over time, you'll reap the benefits of the content you've invested in, provided that your audience engages with the content… At the end of the day, gross margin flows to whoever owns demand creation. If you can shift demand, margin will flow to you… The third category is scaling the business. When we launch in new markets, typically, we run losses for many years. Among the reasons we run losses is that labels extract a toll tax from us in the form of upfront guarantees in order for us to obtain licenses to launch. Over time, we grow into the cost of those licenses, and eventually, those markets shift from gross margin negative to gross margin positive.”
As discussed at the outset, global scale isn’t the issue. The company has maintained its strong leadership position in the industry and will likely have more than half a billion users around the world by the end of 2023.
So, that leaves us with the two-sided marketplace in the music business and non-music audio content, most notably podcasting. Let’s take a closer look at each of those buckets to see how they’ve performed in the past few years, in addition to their long-term contribution to Spotify’s business model.
To read the remainder of this post, please subscribe to the TSOH Investment Research service
https://thescienceofhitting.com/p/spotify-the-power-question?s=w
Spotify: The Power Question
“The product-market fit and power questions are different questions; one doesn’t necessarily answer the other… When you have a business model that gets you to product-market fit, there may be a power...
thescienceofhitting.com
No comments yetBe the first to add your insight!