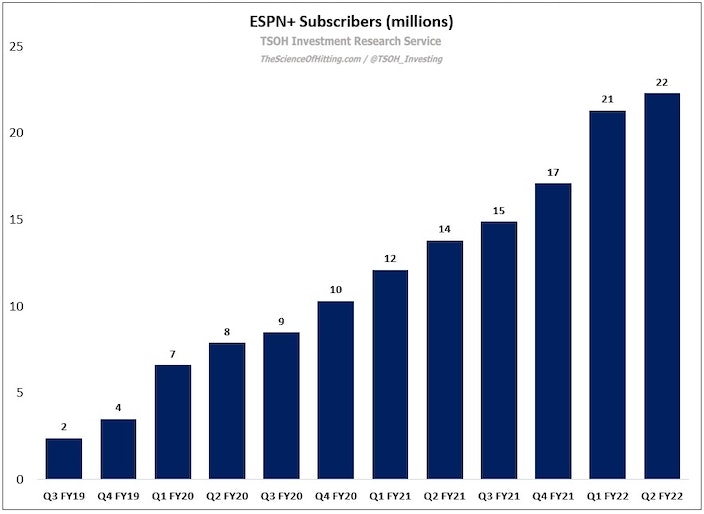 Brett Schafer@ccm_brettSeptember 12
Was great reading this morning. Thanks for sharing

The Science of Hitting@tsoh_investingSeptember 14
Author
@ccm_brett Thanks Brett, much appreciated

Ryan Henderson@ccm_ryanSeptember 12
Loved the writeup this morning. Only gripe was that you didn't include the MLS rights on your ESPN+ graphic :(. But I think that deal was signed a while ago and it's ending in 2 years anyways

The Science of Hitting@tsoh_investingSeptember 14
Author
@ccm_ryan Haha the MLS, we'll see how it goes for Apple :) On that point, seems ESPN has become a bit less enamored with soccer. Let a couple secondary deals go (Serie A), curious what the data is saying (largely ESPN+).

Ob2@tgsmSeptember 12
I would also add that Buffett & Munger’s decision was a capital efficiency measure as well. (I have to gather some old readings & notes or scour the net)Accounting wise, Berkshire benefited by not having a controlling stake over cap cities once they gave proxy to Tom.
“As evidence of our confidence [in Cap Cities], we have executed an unusual agreement: for an extended period Tom, as CEO (or Dan, should he be CEO) votes our stock. This arrangement was initiated by Charlie and me, not by Tom. We also have restricted ourselves in various ways regarding sale of our shares… Some might think we’ve injured Berkshire financially by creating such restrictions.”

The Science of Hitting@tsoh_investingSeptember 14
Author
@tgsm Thanks for sharing Ob2!