Whitecap's financial and operating results for the second quarter were once again ahead of expectations as the Company maintained operational momentum from the first quarter drilling program resulting in production of 132,293 boe/d and record funds flow of $677 million or $1.08 per share.
After capital expenditures of only $88 million, the Company generated $589 million of free funds flow in the second quarter, of which over $175 million was returned to shareholders through our base dividend ($56 million) and our normal course issuer bid ("NCIB") ($121 million). Net debt of $674 million at the end of the second quarter was approximately $125 million lower than our targeted $800 million of quarter end net debt.
https://www.wcap.ca/investors/news-releases/details/whitecap-resources-inc.-reports-strong-second-quarter-results-and-record-funds-flow-per-share/239

ATB Capital Markets:
Both operational and financial results for the quarter came in above expectations. The Company provided strong additional well results from its prior joint venture with XTO Energy Canada, which will likely resonate positively with investors watching for updates on WCP's recent acquisition of XTO. 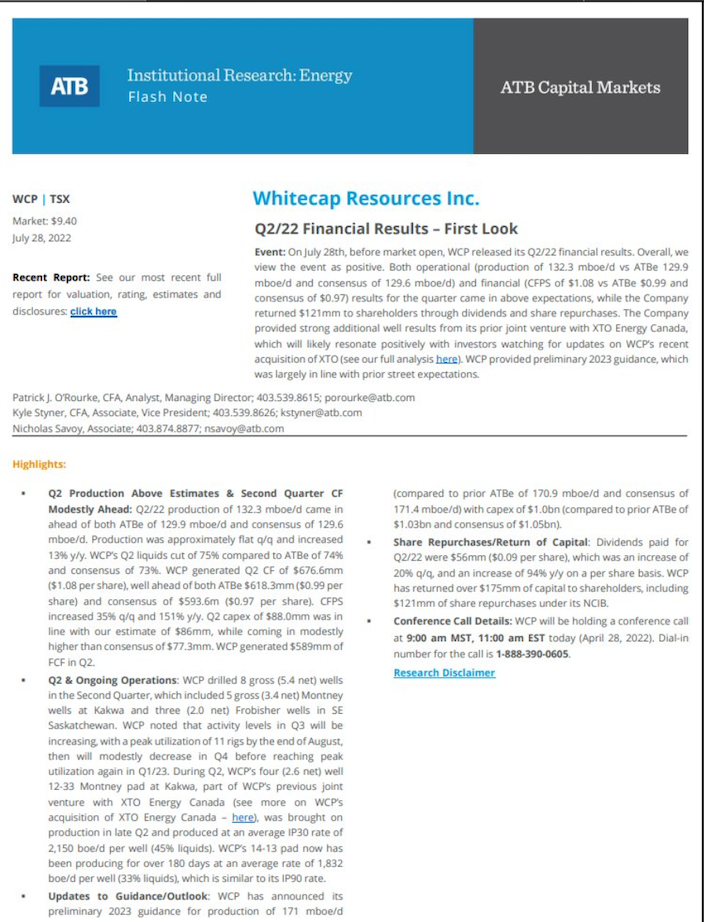 CIBC:
Whitecap Resources reported Q2/22 results that were above our expectations and consensus. Variances to our estimates stemmed primarily from better-than-expected light oil realizations. We are focused on the expected close of the previously announced XTO acquisition and the achievement of net debt targets of $1.8B and $1.3B, which is expected to result in dividend increases later this year and in H1/23, respectively.
Price Target $15 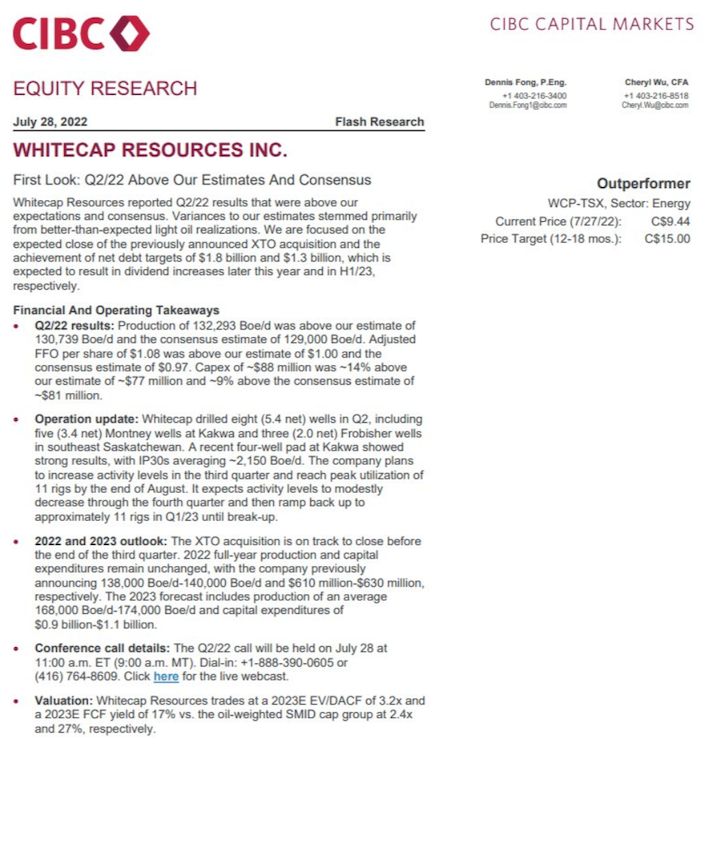 RBC Capital Markets:
Whitecap's Q2/22 results showcased stronger than anticipated cash flows and volume growth, coming in ahead of RBC/consensus expectations, with capital spend roughly in line with RBC/consensus estimates. We expect WCP shares to trade ahead of peers today on the back of a strong print, and will be looking for incremental details on the conference call at 11am ET this morning.
Price Target $16 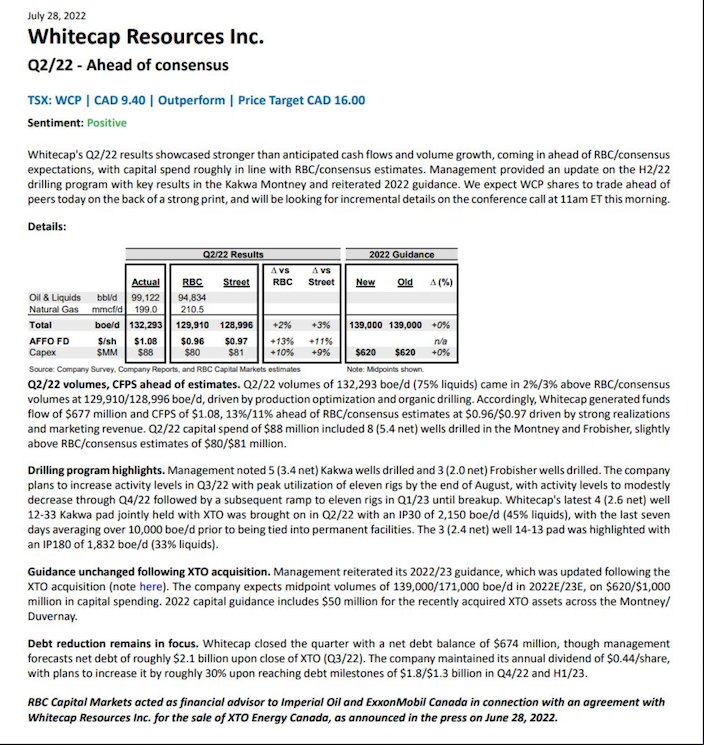 Scotiabank:
Our positive take - CFPS beat consensus due to higher-than-expected production and realized prices.
Impressive Montney well results - WCP's most recent four-well 12-33 Montney pad at Kakwa has produced an IP30 rate of 2,150 oboe/d. The pad is producing at an impressive rate of 10,000 bye/d.
Price target $13 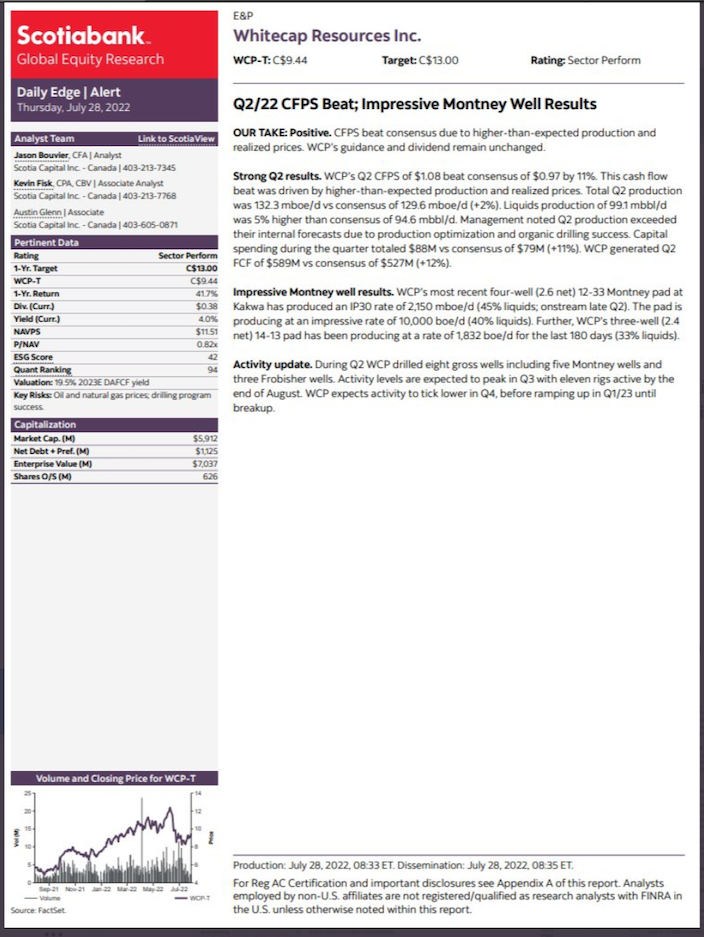 Nathan Worden@nathanwordenJuly 28
And for people who want a quick intro to Whitecap, you can check out this 2 minute video where @sohaibab9 pitched it back in April:
https://twitter.com/NathanWorden/status/1515201599953461250 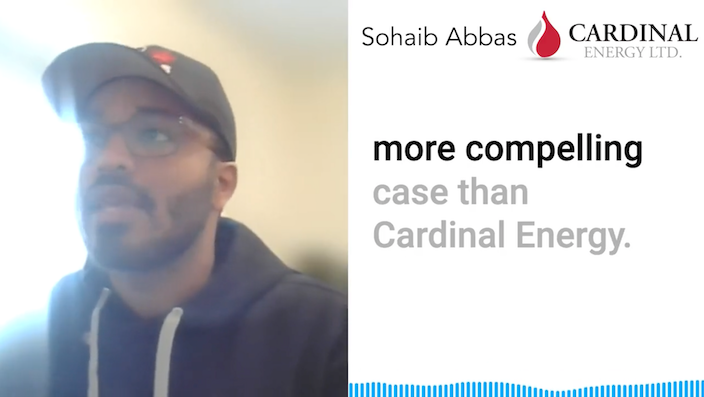 Jennifer@jennymanydotsJuly 28
Author
@nathanworden I hadn't seen that, thank you Nathan - @sohaibab9 is such an incredible ambassador for Canadian energy. (The video is for Cardinal though, did he do another for Whitecap? or is it the brief mention regarding their CCUS?)

Nathan Worden@nathanwordenJuly 28
@jennymanydots Oh you're totally right! Silly me, it was Shubham who pitched Whitecap— here's the link to that one:
https://www.youtube.com/watch?v=exXJZKKeKp8&t=22s 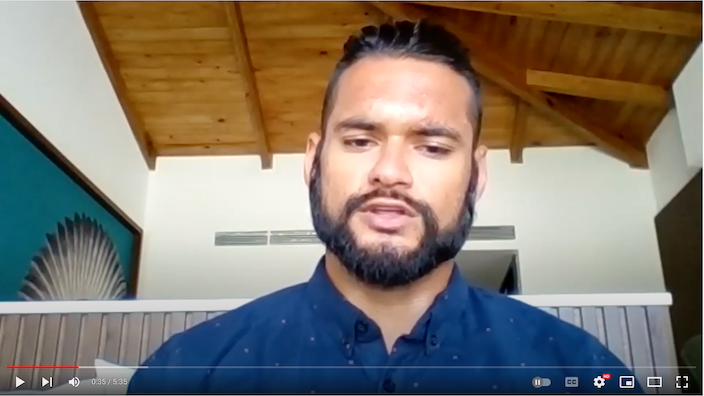 Nathan Worden@nathanwordenJuly 28
@jennymanydots I should have caught that! The thumbnail with Sohaib even says 'Cardnial Energy' and not Whitecap 😄🫠

Jennifer@jennymanydotsJuly 28
Author
@nathanworden Thank you, I hadn't seen that either - I appreciate you posting and well done, Shubham! He made several excellent points. Unfortunately the market still seems to be punishing WCP for their XTO acquisition but as Burnsco on Twitter says - it's a "flotation device being held down". I suspect once the debt is eliminated (possibly by EOY), the share price will see significant upside.

Nathan Worden@nathanwordenJuly 28
@jennymanydots that's a very credible thesis— might need to have you come on and pitch that update! 😁
Eliminating debt and just getting some time from the acquisition should help a lot.

Jennifer@jennymanydotsJuly 28
Author
@nathanworden LOL, as always I am partial to written word over spoken.

Nathan Worden@nathanwordenJuly 28
@jennymanydots haha totally ok— the pen is mightier than the Zoom!