Nathan Worden@nathanworden09/18/2020
$332.6m follower assets
Leverage Addiction
Let's say you're a smart person who wants to enjoy the benefits of financial leverage without falling into the traps. That should be possible if you're careful, right?
But leverage is addictive. Once you profit from it, very few people return to life without it.
One way to think about this is in terms of other addictive substances.
For example, Heroin causes the level of dopamine in the brain’s reward system to increase by up to 200% in experimental animals. It's easy to see how getting hooked on something like that puts you at its mercy in a hurry.
While it's a bit sensational to compare leverage to heroin, I would argue that its more prevalent in society and causes more overall harm. After all, leverage is just borrowing someone else's money to accomplish something you want to do now. It's a form of debt. Everything from credit card debt to student loans, to shorting stocks- all utilize borrowing money you don't have.
And the worst part is, when things go wrong, you often end up hurting other people more than yourself. Whether it's the person's whose money you borrowed, or the burden you put on your loved ones to bail you out. 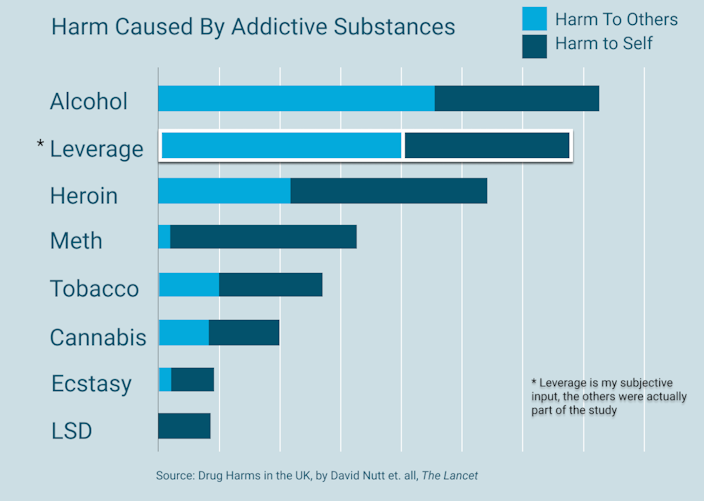 Positive numbers, however impressive the numbers may be, disappear when you multiply them by a single zero. Leverage doesn't always produces zeroes, but it only takes one to cause real harm.
No comments yetBe the first to add your insight!