StockOpine@stockopineAugust 5
$42.7m follower assets
PayPal $PYPL Earnings Preview Q2 2022
Below is the detailed $PYPL earnings preview we released in our substack earlier today. Make sure that you follow us on Commonstock and subscribe to our newsletter to receive similar posts straight to your email. 👇
PayPal reported rather solid Q2’22 results on 2nd of August 2022 and it is trading >9% higher since announcement. The below is a preview of its earnings.
Financial Highlights

The accelerating growth in revenues (7% in April, 10% in May and 12% in June) is a positive sign under the current environment and relative to the decline in sales and marketing expenses by 7%.
The downward pressure on operating margins is a concern for us, however, Management announced a cost savings program that will save c.$900M in FY’22 and c.$1.3B in FY’23 which is expected to deliver margin expansion on a run rate basis.
Dan Schulman, President and CEO, “We're driving meaningful productivity and cost improvement in OpEx and our transaction expenses, and we expect to see these actions result in increased operating margins as we exit the year, setting us up for a strong 2023.”
Key metrics 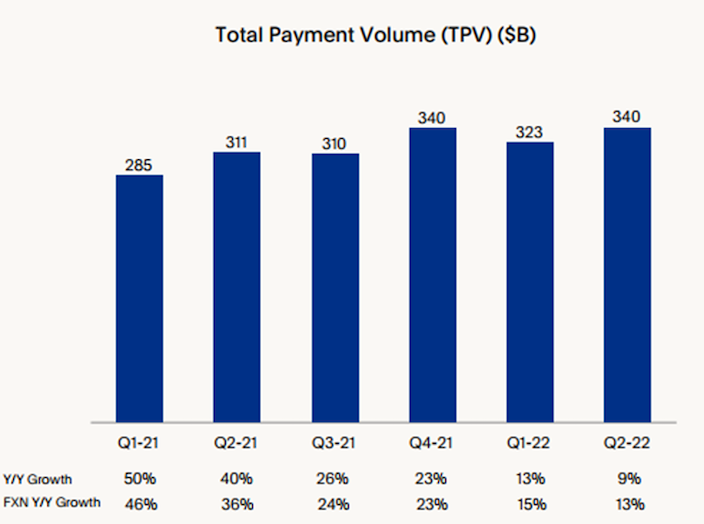 Source: Q2’22 PayPal Investor Update
Signed new deals or launched Pay with Venmo with leading merchants (such as booking.com) whereas Pay with Venmo on Amazon is not yet launched.
Dan Schulman also announced a complete refresh of the app.
Engagement and Active Accounts

Engagement is critical and Management seems to be executing well.
The negative aspect that we picked up (need more visibility on this) was the “decrease?” in Active Accounts excl. Venmo as per prior quarter the Venmo active accounts were more than 85M whereas this quarter are nearly 90M. 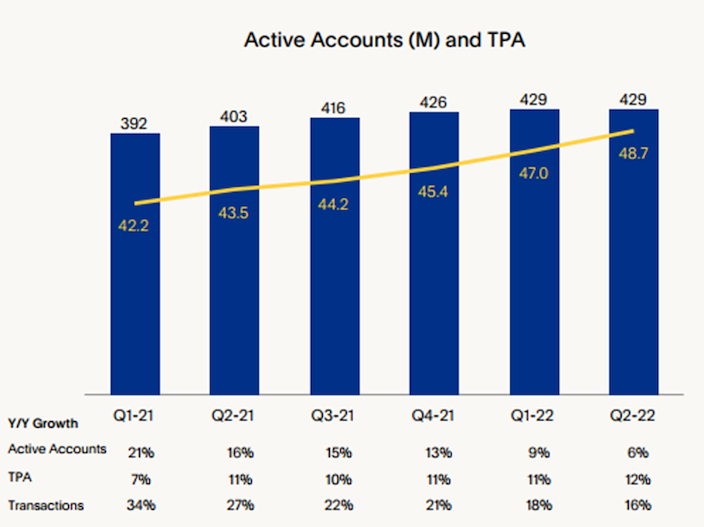 Source: Q2’22 PayPal Investor Update
Take rates
A stabilization in take rates and transaction rates is observed as they remained flat Y/Y and Q/Q, however transaction expense rates increased by 0.09% (mainly Braintree driven) which drags the profitability (transaction margin from 56.8% to 48.7%).
The decrease in margin is mainly mix driven (growth in Braintree volume) and although Braintree’s growth is impacting margins, Gabrielle Rabinovitch explained over the call that SMB space and Europe side of Braintree have attractive profitability characteristics.
Additionally, Gabrielle Rabinovitch guided for improvement in transaction expenses “Starting in the back half of this year, we expect to begin seeing benefits to our transaction expense from leveraging our scale across the network ecosystem.”
“Maybe I would just add, in terms of the $900 million of identified savings this year and the $1.3 billion next year, nearly 50% of that really comes from transaction-related expenses.”

Other Developments
Dan Schulman, “We continue to engage with Jesse and his team at Elliott, and they have communicated that their investment is a vote of confidence in our strategy, in our management team and our ability to generate long-term value for shareholders.”
New CFO, Share repurchases, product innovations, Elliott’s stake and new deals. Love that Shein deal!! => 3rd most downloaded shopping app Worldwide for H1 2022 behind Meesho and Shopee and 1st in US.
Outlook

Note: *c. $0.25 trillion are expected from Venmo (increase of 9% y/y).
Pretty fair guidance both for next quarter and for FY’22 with double digit growth (c.10% spot) for Revenue and lower decline in FY’22 Non-GAAP EPS than prior quarter guidance. Management expects FX headwind for the rest of the year whereas Q3 includes a 150bp headwind from PPP lending program revenue.
Despite the ongoing macro challenges, Gabrielle Rabinovitch – Interim CFO, SVP, Corporate Finance & IR expressed her confidence for PayPal’s future “As we look ahead, we're confident in our long-term strategy and our growth outlook. We believe we are operating in an environment in which strong and enduring platforms like ours get stronger. That has never been more apparent than it is today.”
In addition to the above, Dan Schulman also estimates that PayPal is expected “to grow significantly faster than the rate of e-commerce going forward, both on branded by the way and unbranded as well.”
Concluding remarks
A solid quarter with Venmo and Braintree on fire, management committing to productivity efficiencies through the cost optimization program, strategy focus on Checkout, Digital Wallets (Venmo and PayPal) and Braintree, Elliot’s stake which could unlock value and without any significant changes to outlook.
Disclaimer: Not a financial advice
PayPal Earnings Preview Q2 2022
PayPal reported rather solid Q2’22 results on 2nd of August 2022 and it is trading >9% higher since announcement.
stockopine.substack.com
No comments yetBe the first to add your insight!