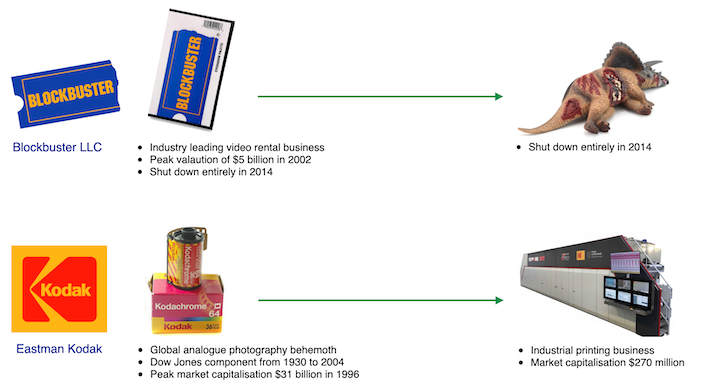 Eastman Kodak (Original Ticker: EK) is a textbook case of falling victim to technological disruption. From its inception in 1888, Kodak became the dominant brand in analogue cameras, photography paper and processing. At its peak, Kodak controlled 70% of the US photographic film market.
Steve Sasson, an electrical engineer at Kodak, invented the digital camera in the mid-1970s. He developed the system of electronic components that could capture an image and display it on a screen without the need for physical film media. Unconvinced, the executives at Kodak failed to understand the significance of this digital film-less technology, fearing it would just endanger its current analogue photography business.
By the mid-1990s, Kodak’s competitors began releasing mainstream digital cameras in increasing numbers, relegating analog film processing to the realm of traditionalists and enthusiasts. Kodak became the victim of its own innovation. The executives failed to exploit the potential of being a first-mover advantage. Their reluctance to evolve their own business model is a cautionary tale of executive passivity and lack of foresight.
Eastman Kodak filed for Chapter 11 bankruptcy protection in January 2012, delisting from the New York Stock Exchange. In September 2013, Eastman Kodak re-emerged from bankruptcy and re-listed on the stock exchange (New Ticker: KODK) after issuing new shares. It survives as an industrial printing company.
The following quote from Morningstar’s authors of the book "Why Moats Matter" provides excellent description of a great business:
"So what's a great business? Essentially, we think it's one that can fend off competition and earning high returns on capital for many years into the future - increasing earnings, returning cash to shareholders, and compounding intrinsic value"
Heather Brilliant & Elizabeth Collins
Morningstar
As good as this description is, I would add a phrase to include the ability for a company to pivot its own business model to adapt and evolve in lockstep with its evolving marketplace.
A lot of incumbent companies don’t see disruption coming. When they finally do, they’re not agile enough to respond. Investors need to be eagle-eyed to spotting upcoming innovations and trends that might threaten the businesses we own. We need to be alert to what’s on the horizon and assess whether it’s consequential or not. Then we need to monitor whether the company executives respond accordingly. This all takes effort. Individual stock ownership is not a passive affair.
In the book "How Google Works", Google executives Eric Schmidt and Jonathan Rosenberg assert "the pace of change is accelerating". This is exacerbated by faster adoption rates to new technology and new concepts. In the United States, it took 75 years for the landline telephone to reach 50 million users. For the same 50 million user milestone, it took airplanes 68 years, lightbulbs 46 years and television 22 years.
The theme of rapid change is well documented. Over the last 50 years, the rate of change to the business landscape has accelerated. Innovation and disruption is occurring at a faster pace and companies who are slow to adapt will become extinct like the dinosaurs. We can look at the composition of the S&P 500 index which has experienced faster turnover in its stock constituents.
"A recent study by McKinsey found that the average life-span of companies listed in Standard & Poor’s 500 was 61 years in 1958. Today, it is less than 18 years. McKinsey believes that, in 2027, 75% of the companies currently quoted on the S&P 500 will have disappeared"
Professor Stéphane Garelli
December 2016
The following chart from research firm Innosight shows the declining lifespan of companies belonging to the S&P 500 index: 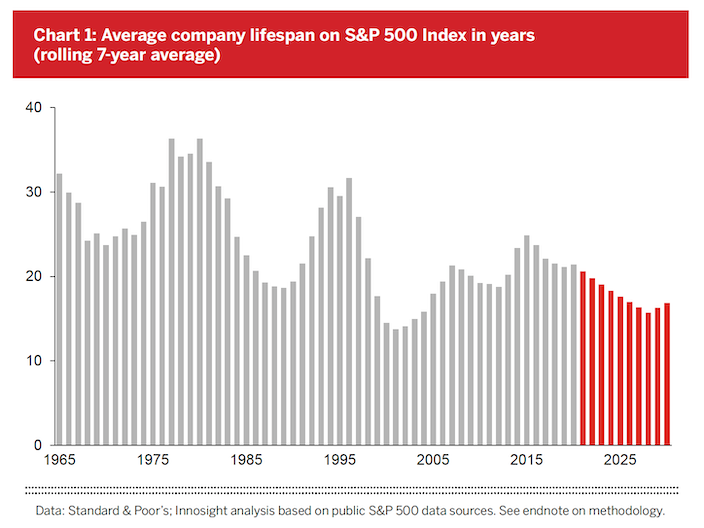 The average tenure of companies in the S&P 500 index in 1964 was 33 years. By 2016, the average tenure shrink to 24 years, a 25% decline in tenure. Innosight predicts the average tenure to continue to shrink as creative destruction, emergent industries and corporate mergers and acquisitions continue at pace.
"Our latest analysis shows the 30- to 35-year average tenure of S&P 500 companies in the late 1970s is forecast to shrink to 15-20 years this decade"
We want to avoid holding stock in a business during its own death march. Holding a stock all the way up for years, or even decades in some cases, only to watch it fall all the way down to your cost basis is an awful feeling. Unfortunately the endowment effect is a powerful bias. I have been guilty several times of holding on to a business for far too long.
Successful investors have a definitive exit strategy to avoid the painful "popcorn trade" where years of capital gains evaporate right in front of your eyes. The downside can be selling too early and leaving enormous amounts of future gains on the table. Companies can stage a comeback. If I’m wrong and I haven’t found a better opportunity for our capital, I can always buy back the stock … ego allowing.

What I’ve described is the "buy-to-hold" mantra rather than "buy-and-hold" mantra. I first came across this terminology from Scott Phillips, Chief Investment Officer of Motley Fool Australia. He admits to not remembering where he got it from originally, but the intent of the phrase is to counter the "never sell no matter what" mindset.
Conor Mac @investmenttalkk drew my attention to this excellent quote from Todd Wenning from Ensemble Capital:
"There's no such thing as buy and hold with equities because CORPORATIONS ARE ORGANISMS operating in ecosystems and, as such, are changing internally and responding to external stimuli. You can buy and hold something static like a painting or gold, but not equities"
In a nutshell, my belief is you "buy-and-hold" a market index fund, and "buy-to-hold" an individual company stock. An individual company stock will require the effort of regular monitoring and reevaluation, while market index funds are zero effort, only requiring lazy sitting power. I can excel at that.

Alejandro Rodriguez@alejandro_r15h
Worth framing:
""The market will reward a diverse range of investment styles … just not all at the same time"
— The Jazzi Cat Team

Conor Mac@investmenttalk13h
Bookmarking this one because I know i'll want to read it again. Another fantastic reflective piece guys, really love these.