Giro Lino@girolino6d
$2.6m follower assets
Brazil April Wrap-Up
====================
After a solid start to the year and the recent sell-off, Brazilian stocks tumbled 10%, while the $EWZ stumbled 14% in April — ended the month +16% YTD, though.
Historically, Brazil’s big banks have an outstanding track record of going through crises with modest operational performance. Benchmarking with global peers, Brazilian banks deliver excellent performance.
As commented in our last wrap:
> “As commented a few weeks ago, while higher interest rates tend to benefit NIMs for most banks, there are risks from weaker GDP growth and high inflation, which can pressure loan growth and deteriorate asset quality.
>
> However, Brazilian banks have been among the worst-performing banks globally. On the other hand, most banks globally have risen in the last 12 months, with only Turkish banks declining more than LatAm banks.”
Also, the global commodity rally was benefiting the Brazilian Index, considering that more than 1/3 of the Brazilian Stock Exchange is composed of commodities companies, such as Vale, Petrobras, and Gerdau.
We believe that Latin America in general and Brazil are well-positioned in the current challenging geopolitical backdrop.
There are many reasons for this: i) geographic and economic insulation from Russia’s War; ii) considerable commodities exposure (grain, oil, and iron ore); and iii) attractive valuation entry points.
The fact that most of the flows into Brazilian equities this year are coming from foreigners is also driving increased demand for more oversized caps and more liquid stocks.
As a result, Itaú, B3, Bradesco, Petrobras, and Vale are among the most liquid and best-performing stocks in the index, supporting the extraordinary YTD performance. 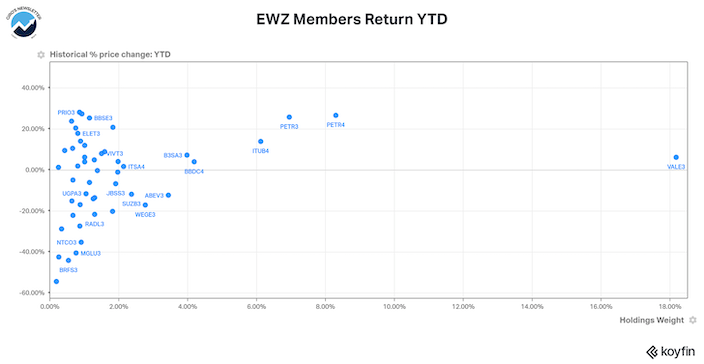 Source: Giro Lino, Koyfin.
However, we’ve been flagging the increasing risk in the region and wrote on Apr 10th that the Brazilian Stocks would not outperform the global market in the following months.
Even though the EWZ is down 20% since we flagged these risks, there is much more risk for deterioration. There is an understanding that BRL is cheap because the carry is high.
Nevertheless, if you simply observe the LTM inflation and the average Selic, you’re losing money(!). Simply can’t agree with the trade.
Also, we believe that higher long-term rates in Brazil should lead to a de-rating in the Brazilian Stock Market. In 2021, our base case for real rater was 3.25%, with a 3.0% and moderate pricing power for Brazilian companies.
Considering the recent deterioration in the local markets, we raised our base-case assumptions. As a result, we consider a 4.5% real rate (vs. actual 5.7%), 3.5% long-term CPI (vs. actual 11.3%), and household income destruction leading to pricing power loss.
If you wish to know the impact on Brazilian Equities, finish reading on the Blog's page.
Independent Investment Newsletter
blog.girolino.com
No comments yetBe the first to add your insight!