Nathan Worden@nathanwordenMay 18
$332.6m follower assets
Block stock pitch (SQ) by Brandon
@greencandleit gave a great pitch for $SQ — which also have their investor day today.
You can watch the pitch HERE or read below ⤵ 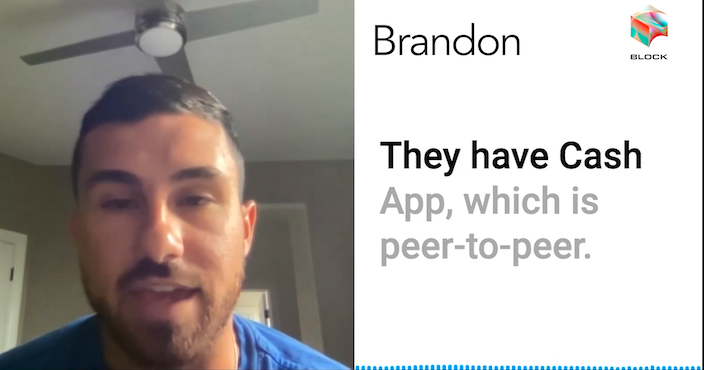 Block has various avenues of their business:

As far as Square goes, they own about 25% of the digital payments market share through 2021. Digital payments are obviously increasing drastically since the COVID-19 pandemic in 2020.
They have the payment rails not only for businesses to accept payments of all kinds, but they also have it for consumers with Cash App. And I think a big aspect of this that they're improving is that they've integrated the Lightning Network, which is essentially a Layer 2 technology on top of Bitcoin that allows them to almost undercut the visa and Mastercard fees that they transact and get for merchants.
When a lot of small businesses are going to be hurting with their underlying costs that 3% fee that they get on every transaction can be eliminated and could be a big point of sale for onboarding new merchants.
Cash App is a big aspect of their business as well. It allows people to move Bitcoin and stocks off the platform, which makes it more user-friendly.
They had $43 million worth of profit in their Bitcoin transaction.
And over the past two years, that's a revenue growth of 138% and profit growth of 155%. So not only is sending cash peer-to-peer with no banking fees a big sell, a lot of people already have this on their phone. And if they want to buy and sell stocks and get into investing, it's an easy way to already onboard people who have this application already on their phone.
They recently purchased Afterpay as well. If merchants need to buy and sell some products in order to help with sales they can do that through Afterpay, and they have the ability to do that and be the middleman and Square can be on all sides of that transaction, whether it's through Cash App payment, Square receiving the final payment, and Afterpay in the middle.
And then they're also developing in-home Bitcoin mining. They're using Tesla's solar power battery to create in-home miners. Bitcoin mining is a $16.7 billion in revenue market.
And there's not really any big players in there right now. Square will be one of the biggest players developing these giant Bitcoin miners.
And then last but not least. Jack Dorsey is now going full-time at Block, which he previously was sharing that time with Twitter.
And, since he's left Twitter there's been a lot of big moves being made in Block. First from changing the name then to partnering with Blockworks, becoming Intel's largest async chip client, developing a fully green Bitcoin miner, and then also the acquisition of Afterpay all in just six months.
With all that it's a bright outlook for Block and a lot of things on the horizon.
twitter.com

Eric Messenger@wall_street_deeboMay 18
That’s the kind of big picture common sense analysis that is refreshing. Not a single useless acronym🤣I almost bought in last week. Lot of their numbers look great.

Green Candle Investments@greencandleitMay 18
@wall_street_deebo i believe in the long term vision of $SQ. If you're a long term investor I believe the short term metrics might matter initially but in the long run it might be over analyzing for a small change in return

Eric Messenger@wall_street_deeboMay 21
@greencandleit just comes down to profitability personally. I need a track record of stability and profitability to even consider the investment. Too many unknowns for me at this stage. Negative earnings is literally the end of my analysis. I’m not skilled in the growth/forecasting realm yet so I can’t play ball with y’all on that field for now, 🤣just watching & learning.

Preston | Investor Insight@investorinsightMay 18
From a higher time frame TA perspective, $SQ has not shown any signs of bottoming and should trade under $55 in the next few months.

Nathan Worden@nathanwordenMay 18
Author
@investorinsight Ooo interesting, this might be a fun one to do a prediction on. Looking at Square on a technicals vs. broader thesis perspective. 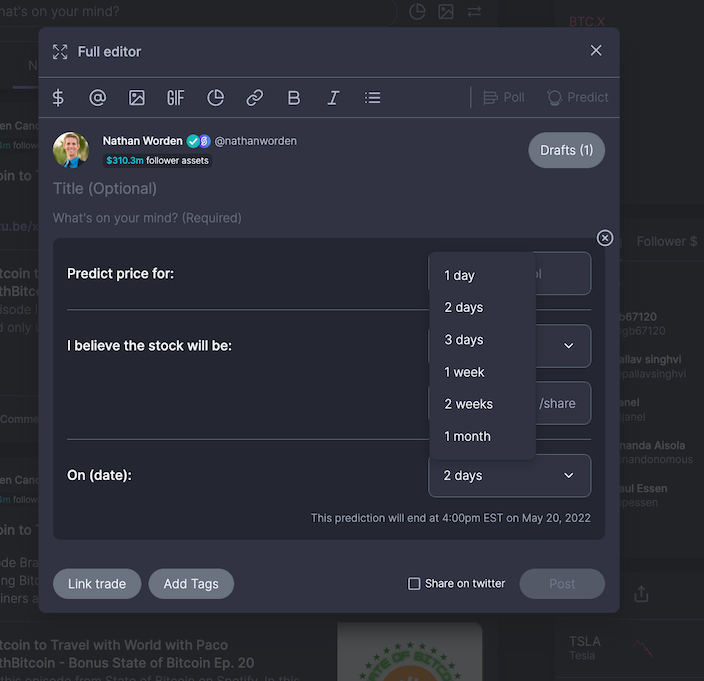 Preston | Investor Insight@investorinsightMay 18
@nathanworden I did not know this feature existed - I am excited to start using it!

Andy Buchanan@andybuchananMay 18
@nathanworden I would predict that predictions on Commonstock will have the option to be longer than one month within the next six months....
But I can't because predictions can't go out that far 😄

Nathan Worden@nathanwordenMay 18
Author
@investorinsight It's a super awesome feature because:
• You can see if the community validates your prediction (or if you're the contrarian)
• It will remind you when the prediction time is over, so you can reflect on what went right or wrong.

Preston | Investor Insight@investorinsightMay 18
@nathanworden Time to do some studying on time analysis. I’ve never factored it into any of my trading/investing, but that could be a huge step forward for me personally.

Nathan Worden@nathanwordenMay 18
Author
@investorinsight love that— I’m along for the ride. Learning about time analysis would be very interesting.

Preston | Investor Insight@investorinsightMay 18
@nathanworden If I come across anything super helpful - I will be sure to share.
I know a couple people from that blue bird app that we shall not name that do time analysis lol.

Alan@prinzmyschkinMay 19
Block is doing a great job and has a great leadership team.. I do think that by any metric they used way too much of their stock to purchase Afterpay. Surely they could have got a better deal? Still I’m sure they will integrate Afterpay with Cash App and Square well.

Nathan Worden@nathanwordenMay 19
Author
@prinzmyschkin totally agree— you might have a fantastic acquisition on the table but you can completely ruin it by paying too much.

Rihard Jarc@rihardjarcMay 19
Block is a big position of mine, but have to be honest that the more Jack is overly focused on Bitcoin the more uncomfortable I am. Wonder if its only me? I am in no way a crypto skeptic but at the same time when I invest in a company I want to do their core business. If I want crypto or Bitcoin exposure I can buy it straight forward.

Alan@prinzmyschkinMay 19
@rihardjarc I agree, although I think that while it is a passion of his, Amrita Ahuja seems to keep the company focused on the broader opportunity with Bitcoin being just one part of that.

Eric Messenger@wall_street_deeboMay 21
@rihardjarc he’s one of the primary reason I’m sketchy on $SQ, although personally, I think if anything will differentiate them in the future, it will be his dogged pursuit of crypto/blockchain adoption. Right now, I don’t personally invest in companies that don’t have a track record of profitability, unless I have some type of experience in, or exposure to, that industry that I think gives me an edge in terms of investing and/or forecasting future growth. Being someone who prefers the stability, there’s a few options I’d prefer.

Rihard Jarc@rihardjarcMay 26
@prinzmyschkin Yeah I agree Amrita is great and really seems laser focused on Cash App as the company should be. Still I would be more happy if the CEO was as well.

Rihard Jarc@rihardjarcMay 26
@wall_street_deebo Yeah, still even if he is a big fan of crypto I don't want the companies interest to be overtrumped by a CEO's own personal interest. Also when it comes to crypto it seems he is very closed minded to everything but Bitcoin.

Alan@prinzmyschkinMay 27
@rihardjarc If you go by Jack Dorsey’s tweets he only seems to care about Bitcoin but actually at the investor day and on earnings calls you can tell that he really understands and wants to grow the whole business. And Block have a great leadership team who have been their a long time. From what I can tell he’s a fantastic CEO but that is obscured by Bitcoin tweets, his beard and tie-dye t shirts!

Vikram@vikramfundJune 15
In recessionary environment, SQ customer base is still Small businesses owners and employees (except cash app), this segment was a beneficiary of low employment rates n fed money pumping. There are headwinds for this segment in coming quarters. I like ecosystem so SQ is not going anywhere but not sure if this os right time to entry.