Appears once you have 30+ followers
Calculated as the total portfolio value of everyone following you (7 day moving avg)
100% Anonymous
The stock market is the greatest distraction to long-term investing.
Sharing research.
@InvestmentTalkk
investmenttalk.substack.com
990Following
4,742Followers
PortfolioPostsCommentsTradesWatchlist

Conor Mac@investmenttalk2h
$341.8m follower assets
Teens, Social Media and Technology 2022
Pew Research put out some great data on teen app usage yesterday, the TLDR can be boiled down to:
• YouTube is surprisingly the stand-out star, with 95% of teens using it and 19% reportedly admitting to using it "almost constantly".
• TikTok is the most popular social platform amongst teens, with 67% using it vs 62% using Instagram, and 59% Snapchat.
• Facebook is a dodo for teens. Whilst 71% of teens reported to using it in 2014, that figure has fallen to just 32% today.
About 35% of teens report using at least one of the above platforms "almost constantly".
• 19% of people said this about YouTube
• 16% of them said it about TikTok vs 10% for IG
• Only 2% of them suggested they use Facebook almost constantly
-> 46% of teens admit to using the internet "almost constantly", up from 24%.
Today, nearly all teens (US) have access to a smartphone (95%), up from 73% in 2014-15.
This still holds true across all household income segments, where smartphones appear to be valued more greatly than desktops, laptops and gaming consoles.
The full report can be found here 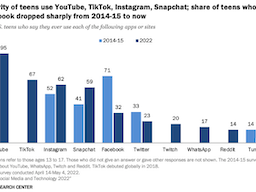 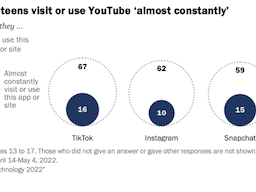 StockOpine@stockopine1h
Interesting statistics. At least IG keeps it up for $META . Is there a similar study on a global scale?
Add a comment…

Conor Mac@investmenttalk2d
$341.8m follower assets
Big Macflation
The price of a Big Mac in the United States since the turn of the century $MCD 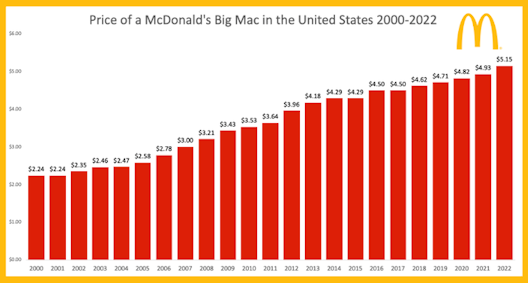 Conor Mac@investmenttalk3d
$341.8m follower assets
Takeaways from this chart? Most investors are likely better served by closet indexing :)
It's fun trying though.

Karan Malhotra@karan104893d
I’d also add context is everything. There’s a reason that chart starts in 2002 when China entered the WTO and Those “EM equities” had a once in a lifetime tailwind, arguably never to be repeated again. Almost all of that performance was 2002 to 2006, ever since the GFC, they have trailed almost everyone else as an index
View 19 more comments

Conor Mac@investmenttalk3d
$341.8m follower assets
What Moves This Stock? - Kura Sushi - KRUS
Kura Sushi US $KRUS is a rinky-dink rotating sushi chain and the subsidiary of a Japanese parent with over 450 locations. The US Kura has 38 locations across the states and is one that I have written about frequently over on my substack, more recently here and here.
The current market cap is ~$826M which for a company that is expected to print $145M in sales this year, is mostly unprofitable, and is not yet at a stage of FCF positivity (they use all operating flows for CapEx to build new units), it feels extraordinary overpriced. Besides the illiquidity of the stock itself (relative basis), Kura is a fundamental scale story, but one where the share price has been severely detached from operating results. For now, at this price, Kura is a highly sensitive narrative-based stock.
As you can see from the more recent earnings announcements, where Kura has consistently beaten expectations across Revenue, Earnings, and Restaurant Level Margins, beats equate to lofty, short to medium term, surges in the share price. Typically in the months thereafter, the price floats back down to reality.
Because of the precarious position of the share price today, I have opted to share some thoughts on what moves the stock in the LONG TERM as opposed to what might sway the share price in the short-medium term. But on that note, I would stress that Kura's shares are illiquid and highly sensitive to any shortcomings in their growth narrative. I, for one, would welcome another 60% drawdown from today's highs.
What Moves the Stock in the Long Term (5+ Years)
Note: Whilst these factors are presented in terms of upside, they also matter with respect to the downside. Should these narratives deteriorate, investors will lose some level of confidence.
• Unit Openings at 20% CAGR - Kura have a goal to open units at a 20% CAGR which should bring their store count up to ~82 by 2026. So far they have continued to match that CAGR.
• Average Unit Volumes (AUVs) - A mature Kura store (opened 18Ms or longer) will have generated ~$3.5M in annual revenues on average pre-pandemic. This metric suffered in 2020 ($1.94M) and 2021 ($2.14M) but management has suggested it is set to make a considerable recovery in 2022 as well as suggested there is potential to expand on pre-pandemic levels in 2023 and beyond. Should this come to fruition then it makes for signs of increasing operational leverage and further economies of scale.
• Restaurant Level Margins - With increased AUVs comes increased sales leverage, and in turn higher restaurant-level margins. Typically oscillating in the mid-10s to low 20s pre-pandemic, Kura shocked investors last quarter by reporting a 22.5% adjusted margin. This factor goes hand in hand with AUVs for the most part and is critical when we consider the longer-term for Kura and their eventual path to profitability.
• Revenues and Operating Costs - I think this goes without saying but for a scaling restaurant enterprise, investors react sharply to revenue prints. With each additional unit, investors observe closely to gain insight into the demand for Kura's brand across the new States that they launch each quarter. With respect to operating costs, or "restaurant operating costs" (namely inputs like Labour and Food costs) investors will be keeping an eye on the development of economies as scale as the portfolio expands. Thus far Kura has kept food and labour costs in control (even reducing them as a % of revenues) in the face of inflation through minor pricing increases.
Longer-term, they expect to reduce food costs as a % of revenues through economies of scale and labour through automation (robotic servers, touch panel ordering et al). For a franchise early in the making, these are vital metrics to track. I would argue investors don't "really" care about GAAP earnings or negative free cash flow at this stage.
There are, of course, other factors but I feel these are the primary ones for the next 5 years. 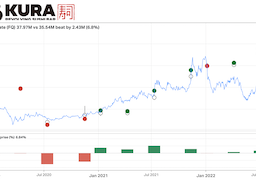 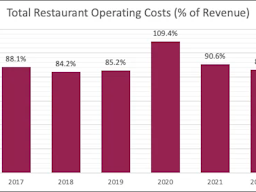 Nathan Worden@nathanworden3d
Very informative! For the goal of opening units at a 20% CAGR, is there a fairly large risk that they’ll over-saturate the markets they are in? Opening new stores at a 20% CAGR feels like there is a great deal of execution risk. (Not to mention it’s dependent on the availability of favorable real estate)
View 10 more comments

Conor Mac@investmenttalk5d
$341.8m follower assets
Have owned $KRUS for only a little over a year and already faced two 120%+ inclines from prior lows, as well as one 60% drawdown. Do I get diamond hand status? 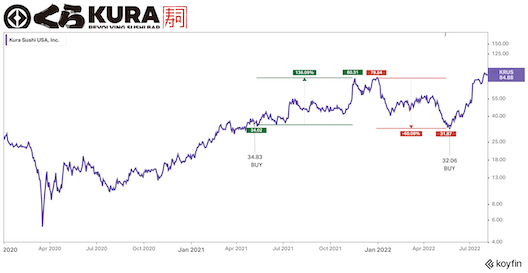 Conor Mac@investmenttalk5d
$341.8m follower assets
87% of the Way Through Earnings
The number of S&P 500 companies reporting positive earnings surprises continues to rise, as 87% of S&P companies have now reported.
Of these companies, 75% have reported actual EPS above estimates, bringing the average after last week up from 73%. In aggregate, companies are reporting earnings that are 3.5% above estimates.
In terms of revenues, 70% of S&P 500 companies that have reported, have reported actual revenues above estimates. In line with last week. In aggregate, companies are reporting revenues that are 3.5% above the estimates, up from 2.5% last week.
"If 3.5% is the final percentage for the quarter, it will mark the third-highest revenue surprise percentage reported by the index since FactSet began tracking this metric in 2008."
"If 13.6% is the actual growth rate for the quarter, it will mark the sixth-straight quarter of year-over-year revenue growth above 10% for the index. All 11 sectors are reporting year-over-year growth in revenues, led by the Energy sector."
"Looking ahead, analysts expect earnings growth of 5.8% for Q3 2022 and 6.1% for Q4 2022. For CY 2022, analysts are predicting earnings growth of 8.9%.
The forward 12-month P/E ratio is 17.5, which is below the five-year average (18.6) but above the 10-year average (17.0). It is also above the forward P/E ratio of 15.8 recorded at the end of the second quarter (June 30), as the price of the index has increased while the forward EPS estimate has decreased since June 30.
During the upcoming week, 23 S&P 500 companies (including one Dow 30 component) are scheduled to report results for the second quarter." 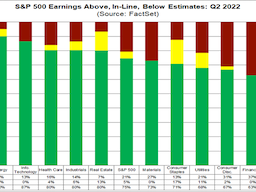 Conor Mac@investmenttalk6d
$341.8m follower assets
Meta Raise $10B in Debt for the 1st Time Ever
News that $META is selling $10B in notes for the first time ever. I suspect this will be for buybacks, M&A, and your typical CapEx.
Whilst Meta does have ample cash on hand, having ZERO debt for a company as large as Meta could be construed as inefficient. Plus, ten billion is hardly overzealous.
Thoughts?
48%Great - Buyback machine!
34%Meh - Not sure
16%Bad - Start of slippery slope
43 VotesPoll ended on: 08/05/22
Rihard Jarc@rihardjarc6d
I think it's good but should have done it even sooner when rates were lower. It's similar to when they did the big buybacks in Q4 2021. Could have used that money now with the stock being down substantially, here the same thing could be said. Why didn't you raise debt sooner in a record low interest rate environment.
View 17 more comments

Conor Mac@investmenttalkAugust 4
$341.8m follower assets
No wonder passive investment vehicles are so widely popularised in the West. Self-perpetuation of price driving narrative. An increasing number of investors are becoming more comfortable with earnings "average" returns (that of the market).
As the composition of passive investing grows, does the potential alpha of being a (presumably good) stock picker increase or decline? 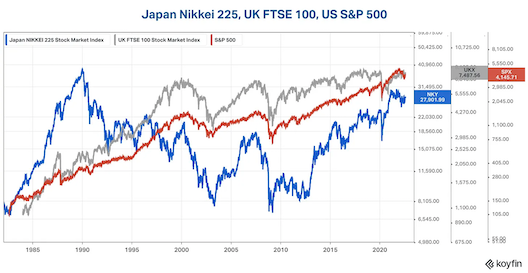 Rihard Jarc@rihardjarc6d
I think it will soon be a time where we open a debate on how much "passive" an investment in S&P500 or Nasdaq really is as the top 5 companies form over 20% of the index (S&P 500), and over 40% of the Nasdaq.
View 10 more comments 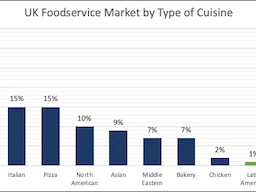 Johan Eklund, CFA@piggybackAugust 4
Great business-oriented deep dive memo @investmenttalk(!)
PS: @commonstock, this is probably top of mind but you have a great long-tail community opportunity in attracting and successfully promoting fundamental content with longer-term investing relevance. Including long-form write-ups like this one.
View 13 more comments

Conor Mac@investmenttalkAugust 2
$341.8m follower assets
<1Y Performance is a Distraction
Some positive vibes for the morning. Was reading a Financial Times piece and stumbled across an opinion piece by Howard Marks where he notes the following; "One quarter's or one year's performance is meaningless at best, and a harmful distraction at worst".
There was also a great quote about waiting for a bus.
The full article for those interested. 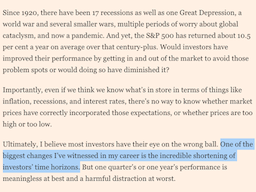 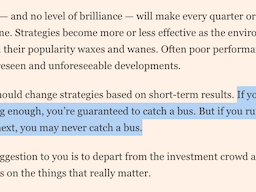 Ben@rpinvestmentsAugust 2
Shout out to @commonstock, let’s add the longer term performance metrics. A 3 and 5 year would be nice
View 9 more comments
Next