Goldridge Capital@goldridge_capSeptember 17
Rooting for Imperial Ginseng Products
Summary
Imperial Ginseng Products ($IGP.V) is a Canadian microcap trading at C$0.76 per share while its net assets are worth at least C$1.34 per share. The discounted price per share represents a potential upside of ~70% per my assumptions, and investors can expect the liquidation of the company with proceeds to be distributed amongst shareholders. Management has stated that the wind-up of operations is expected to be completed by the end of June 2023, less than one year from now.
Given the market cap of C$5.6 million, all institutions are likely barred from owning shares of IGP and furthermore, I can imagine that not many retail investors have caught wind of this either given an average daily volume of ~2,000 shares.
Get out (leave!) right now, it’s the end of you and me
There’s no avoiding it, but IGP is not a great business. It’s a commodity business whose fate rests with the weather and the price of ginseng roots. As such, COVID-19 was the catalyst for it to come crumbling down as operations took a turn for the worse:
Ultimately, most of these factors came to a head and in May of 2020, the Board decided to cease future crop planting activities and instead, focus on harvesting existing crops. Subsequently in October of 2020, the Board decided IGP would exit the industry.
The proxy form released in November 2021 notes a special resolution proposing the liquidation of all the property and equipment followed by a distribution of proceeds to shareholders. The board and management recommended shareholders vote for the resolution. As for the results of the vote, it’s an unfortunate cliffhanger because since then, there have been no filings or press releases on the outcome of the vote. There have only been repeated wordings in subsequent MD&As saying that “the Company’s goal remains to generate the highest possible end value upon the Company’s exit from the ginseng industry”. While some may be turned off due to the lack of explicit vote results, I do believe that currently, management is aligned with shareholders. The board recommended that shareholders vote for the special resolution and continues to disclose that its goal is to exit the industry at the highest terminal value. To the benefit of insiders, Stephen McCoach (CEO and Chairman) and Maurice Levesque (Executive VP and Director) beneficially own ~49% of the company and if my calculations are correct, this unwinding process could benefit them to the tune of ~C$4-5 million. Given another year of working through the operations of a dying company with a seemingly paltry combined salary of ~C$460,000 or getting a nice payout worth potential multiples of that, I think I’d choose the latter.
Valuation
It is said that “liquidations are tricky, they always take longer than you expect them to, and you always get a little less than you expect as well”. As such, below is the most recent snapshot of the balance sheet with self-prescribed handicaps to arrive at a net asset value of C$1.34/share. Note that the post-employment benefit obligation has been adjusted to its future value of C2.2 million as it currently sits on the balance sheet at its discounted value.
Risks
The main risk here is whether the value of such assets can be realized as stated on the balance sheet. Should the company be unable to sell its inventory, it could be forced to take a loss on that inventory, reducing the potential payout, or it could wait longer to try and liquidate, depleting potential IRR. Furthermore, ginseng prices could fall even further. In Q3-22, IGP had to entice buyers with free products. Lower market prices could impair biological assets further and reduce future liquidation values. The good news is that a good chunk of the balance sheet comprises cash. 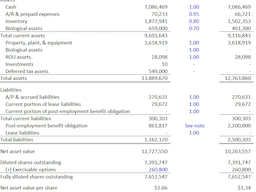 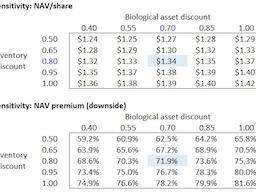 Conor Mac@investmenttalkSeptember 20
Hey, just noticed this post (been off for a week) and it's great to see you over here on Commonstock. Fab way to introduce yourself too, solid write up.
View 2 more comments
Next