"Those factors may lead some investors to steer clear, depressing Haleon’s valuation. It could prove more appealing to a rival...Haleon may find it harder to repel a suitor next time around."

"Buried in Vodafone's annual report is the revelation that IoT is being prepped for a spinoff. Greater independence from the parent company 'will help to accelerate the platform's growth and attractiveness...'

Dollars and Sense@dollarsandsenseMay 15
$14.7m follower assets
$AJRD Left Behind
Remember when Lockheed Martin $LMT announced their intent to acquire Aerojet Rocketdyne $AJRD and the FTC sued to block the deal? Ever wonder why Lockheed was willing to pay a 25% premium for the company? We'll let's take a quick look at this little rocket company.
The primary business of $AJRD is rocket propulsion systems. In terms of competition in this field, it is quite dense.
However, $AJRD is the only systems maker to service and build all 4 types of propulsion systems.
In terms of where their revenue comes from it's basically all government contracts. However, it is pretty diversified across various departments.
$AJRD has a fairly linear growth path providing propulsion systems not only for defense-based rockets but also for space exploration rockets in the future.
As for why Lockheed Martin wanted to acquire the company the explanation is somewhat obvious. They already have several large contracts with the company to build the propulsion/engine systems for Lockheeds rockets.
The initial announcement of $LMTS intent to acquire caused $AJRDS stock to jump 25%.
Unfortunately given the fact that $AJRD is the last independent missile propulsion provider the FTC sued to block the deal.
This caused the stock to drop about 18% and overall the company has fallen ~25% from its post-deal-announcement highs.
While Lockheed won't be able to own it I have been looking at it for quite a while. Just look at the consistency of sales growth and the EBITDAP Margin growth.
Unfortunately, Cash Flow seems to be a problem, and probably worth diving a little deeper to see what's going on there.
Overall I think $AJRD is a fairly overlooked company producing steady returns for shareholders by consistently growing sales and winning contracts from both the US Government and other Government Contractors. 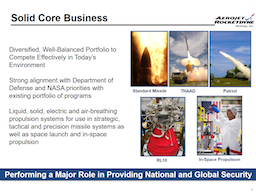 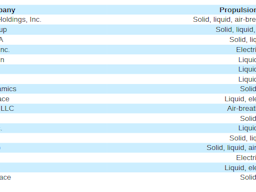 Brad Thibeau@brad12/18/2020
$101.3m follower assets
$AJRD Rumors
If you're not familiar with the company, Aerojet Rocketdyne is a smaller cap defense and space company(roughly $3.30B). They have strong tech in both spaces, very favorable economics, and strong real estate holdings as well. Contracts with both NASA and the department of defense that will continue on for the foreseeable future.
Strong business that could continue on as they have since the early 1900s without a problem. This morning, a rumor came across that Boeing and Lockheed Martin are pursuing buying the company.
https://twitter.com/DeItaone/status/1339944064112877569?s=20
As expected, this shot the stock way up. 30% gain on the rumors which was welcomed by investors since the stock is flat on the year and has mostly flat since 2017.
Wait.
In reality, the stock didn't move. At all. Since $AJRD operates a healthy profitable business, one would assume any buyer would have to pay a premium in order to acquire. Yet nothing.
Anyone ever see anything like that before? I don't know if it's because the market doesn't believe the rumors or isn't paying attention because it's defense, but personally, I can't recall a buyout rumor ever be met with absolutely nothing.
I'm long calls, 2/19 and 5/21.
*Walter Bloomberg on Twitter
“$AJRD speculated as a takeover target at DealReporter with Boeing and Lockheed Martin cited as possible suitors.”
Twitter
Next
Commonstock is a social network that amplifies the knowledge of the best investors, verified by actual track records for signal over noise. Community members can link their existing brokerage accounts and share their real time portfolio, performance and trades (by percent only, dollar amounts never shared). Commonstock is not a brokerage, but a social layer on top of existing brokerages helping to create more engaged and informed investors.